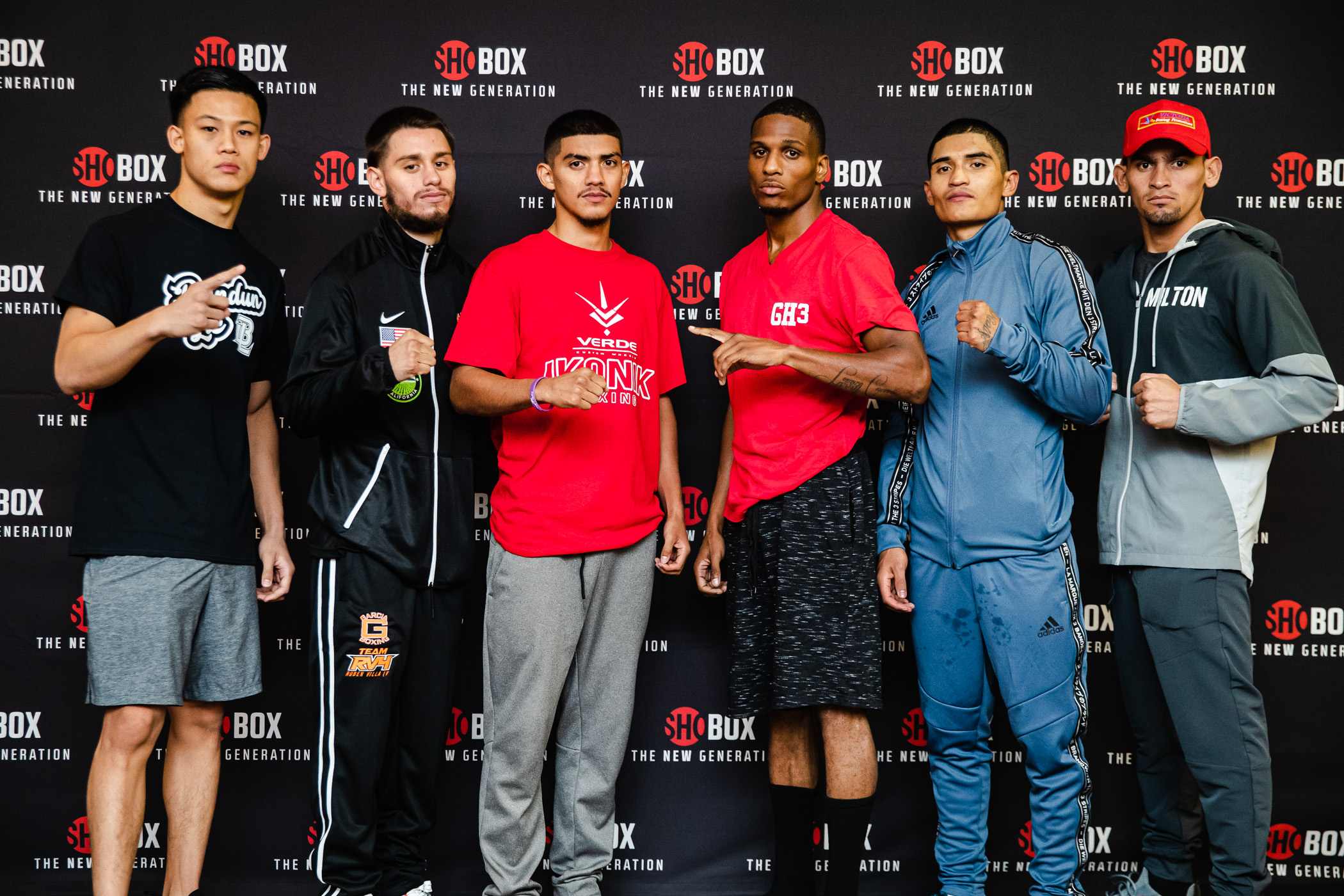 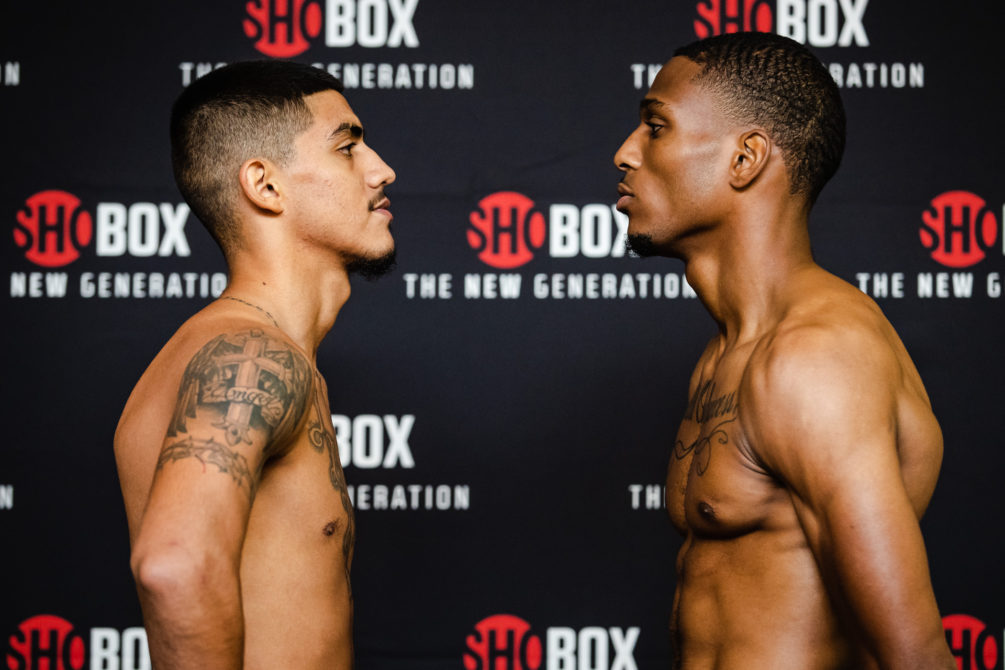 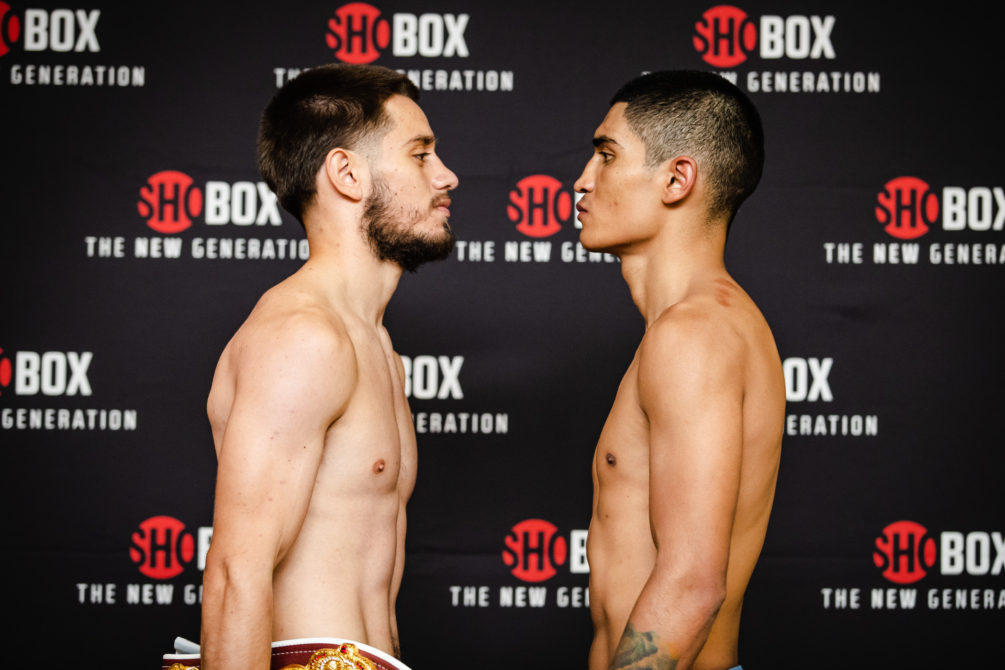 Dutchover (13-0, 10 KOs) is making his second appearance on ShoBox and is fighting in his hometown for the first time as a professional. Dutchover said he would enter the ring wearing the high school football jersey of Midland legend and former NFL star Cedric Benson, who was tragically killed in a motorcycle accident on August 17 in Austin. Cleveland’s Mattice (14-1-1, 10 KOs) will be fighting on ShoBox for a fifth time.

Tickets for the event, which is promoted by Banner Promotions and Thompson Boxing in association with GH3 Promotions, Garcia Promotions and Now Boxing Promotions, are priced at $120, $100 and $80 and can be purchased online at www.haciendamidland,comor by calling 432-563-3737.

Here’s what the fighters had to say before they weighed in at the Doubletree by Hilton.

MICHAEL DUTCHOVER
“This is just like another fight. My family lives here, but I’m staying at the fight hotel and treating it like any other fight. The location doesn’t matter but I’m glad it’s here though. The ring is my home, so I fight at home every fight.

“Everyone knows football is king here, but my dream has come true and it is time for Friday Night Lights, boxing-style.

“Cedric Benson is a Midland legend and went to my arch-rival high school Midland Lee High. I grew up seeing him star here locally and then play in the NFL. He was a true inspiration for me and all aspiring athletes from Midland.

“August 31 is a tragic day for all of Midland and West Texas as five people were gunned down here. For the past few weeks everyone has been sad, but I feel this is a perfect time to bring some happiness and positivity to the area.

“My last fight was quick, but you can never be a perfect boxer and you can always get better. So we worked on some things and Friday night I’m going to show how I’ve improved.

“My ring generalship and just being calm in the ring is what I’ve focused on. The fight is won in training camp and I’m in the best shape I’ve been in.”

THOMAS MATTICE:
“This will be a tough test, but we’re ready. The crowd might ‘ooh’ and ‘ahh’, but I won’t hear it. The crowd means nothing because what it boils down to is two men in a square.

“People expect me to start slow and that’s what I’ve shown, but you’ll see something different from me right from the start.

“There is a regional WBO belt on the line so it’s a big fight. Whoever wins will be ranked after this fight.

“I’m going to be on point tomorrow night. When I get hit, it’s because I do something stupid. That’s not going to happen this time.”

“I feel like I adjusted OK in my last fight on ShoBox against an awkward fighter. It was a good learning experience. I can keep my composure and I know that if I’m in a dog fight, I can adjust and go into deep waters. My opponent will start to fade around round six and I can drown him.

“I feel like quiet and soft-spoken doesn’t get you very far, so I plan to be a little more aggressive.

“There aren’t many people as fast as me. I feel like my confidence is pretty high right now, but anything can happen.

“I’m a fast fighter and my quick feet are my biggest attribute. We all know, ‘slow feet, don’t eat.’

“Going to Robert [Garcia]’s gym in Riverside really helped me because he has a lot of young and hungry guys.

“Shakur Stevenson was my amateur rival and I know he’s fighting next for a world title. But my time will come. I predict that within 12 months I will be doing the same.”

“I know I’m fighting a tough and skilled opponent, but I just feel like this is my time. We’re both Olympians and have had success. We know each other and have sparred together. This is a once in a lifetime chance for us and we jumped on it. It’s too big an opportunity to pass up.

“For this fight we decided to train in Otomi, Mexico. My trainers are Mario and Ramon Morales and they have many years of experience as they were trainers for Marco Antonio Barrera and they also helped me train when I won the regional WBF North America belt and the Latin American WBC belt.

“Villa is a very intelligent fighter with good technique. He’s not an easy fighter but we are prepared and look forward to getting the victory.

“I’m excited to fight on SHOWTIME. I fought on television once before against Edixon Perez, who was supposed to fight Diego De La Hoya in Mexicali, and I got the victory; I’m looking for the same result on my second televised fight.

“He is a good technical puncher and I know his style and that he won’t be too aggressive. So we’ve worked on how to close the ring. It’s a great style matchup and we expect an exciting fight.

“[His promoter] Mikey Garcia always watches my fights and gives me advice. He has taught me to fight more intelligently and always tells me to be patient. He’s my idol. I appreciate his guidance.”

“I’m excited to gain some new fight fans and I’m excited for my TV debut. I’ve worked for this my entire life.

“My defense, my speed and my offense are my biggest attributes. You’ll see great boxers who run around and around. I don’t do that. I always have a game plan and can do it all.

“Jaron [Ennis] and I are both managed by Cameron Dunkin and we were in the amateurs together. He has a bright future and we’ve become pretty close friends.

“I’ve gained so much confidence with who I’ve sparred and trained with in the past. I feel like this is just my moment to shine. I’m only 20 years old and still have so much to learn.

“It took me six fights to realize you can’t knock everyone out in the first round. After about 10 professional fights I think I finally started to feel comfortable in there.

“I’ve been here for more than a week and we worked out in California and did some sparring and completed our medicals and paperwork.

“I’m very happy for this opportunity and I’m well prepared. Tomorrow night I’m going to take away an undefeated record. I can’t wait.

“Being on TV for the first time doesn’t affect me. I won’t be nervous. I’m just excited.

“No one knows who I am, but I know I can win this fight. That’s how confident I am. I have to be smart and attack him from the start.

Nicaragua has had a strong history of former boxing champion, guys like Roman “Chocolatito” Gonzalez and Ricardo Mayorga. But Alexis Arguello is my favorite.

“I have a solid team behind me, including Marcos Caballero who is the father of former IBF bantamweight world champion Randy Caballero.”