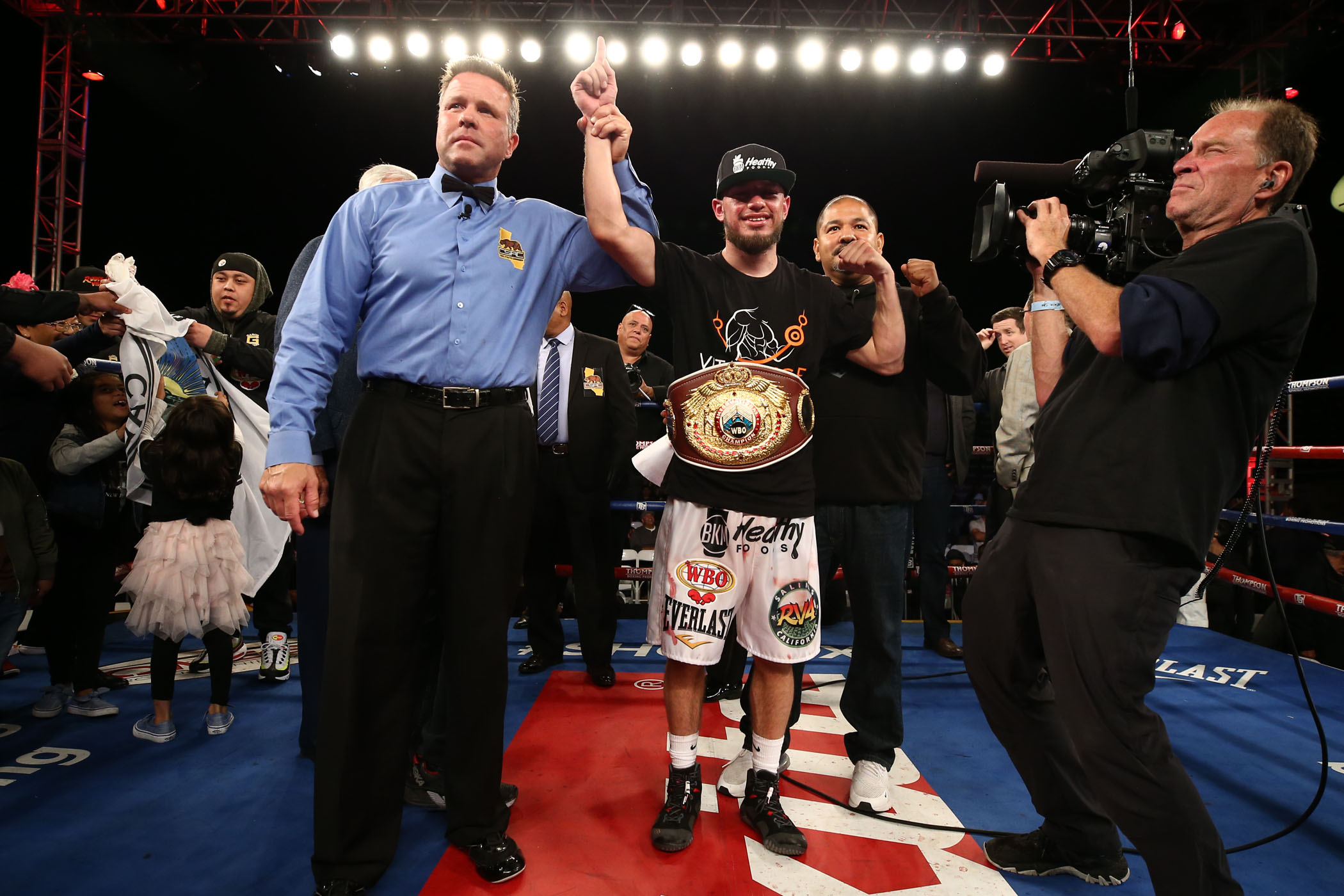 The judges’ scorecards read 98-92, 97-93 and 96-94 in the featherweight bout, although all three ShoBox commentators had Villa winning each round except the 10th round, giving the final round to Lopez (17-2, 8 KOs) in a fight that saw nearly 1,400 punches thrown.

“I give myself a ‘C’ grade,” said Villa, making his second consecutive ShoBox appearance. “He was a tough opponent and had a real awkward style and wasn’t really a boxer. It took me awhile to adjust to him and it was hard not to get frustrated.”

Taken the 10-round distance for the first time in his career, the 22-year-old Villa (16-0, 5 KOs) of Salinas, Calif., took the first two rounds to get used to the top-15 ranked contender Lopez’s awkward style before he began landing heavy body shots to dominate the third round.

In the seventh round, Villa out-jabbed Lopez and continued the onslaught of body punches in the ninth round, but was not able to get the knockout against the game Lopez.

“I agreed with the judges’ scorecards,” the two-time National Golden Gloves Amateur Champion Villa said. “I still got the unanimous decision win so I have no problem with that. I can take a whole lot from this fight tonight.”

Lopez was coming off an upset victory over Ray Ximenez in his U.S. debut in February but could not repeat the feat against the highly regarded Villa.

“I hit him with the better shots,” Lopez said. “I was consistently throwing and landing the power shots while he was just jabbing. I felt good. It’s a complicated to fight a lefty, but I thought I landed the punches that scored.”

In the co-feature, undefeated 21-year-old rising prospect Michael Dutchover (13-0, 10 KOs) made quick work of late replacement Rosekie Cristobal (15-4, 11 KOs) of the Philippines, connecting on a right-left combination to Cristobal’s liver that sent him to both knees before being counted out by referee Zachary Young at 1:46 of the first round of a scheduled eight-round super lightweight contest.

In his ShoBox debut, Dutchover of Santa Fe Springs, Calif., by way of Midland, Texas, recorded six body connects among his 11 landed power punches in the fight that lasted just 109 seconds.

“I have to be able to adjust,” said Dutchover, a runner-up at the 2016 National Golden Gloves and a bronze medalist in the 2016 Olympic qualifiers. “I was given a tall lefty on short notice due to the original opponent dropping out. Part of being a professional is being able to adapt. It’s nothing I haven’t seen before. I’ve seen pretty much every style through the amateurs and now during sparring sessions as a pro.”

Dutchover added: “I was patient and waited for the open shots. He wasn’t covering up the body so that was my target. The plan from the beginning was to break him down. I’m just happy I was able to end it early and give the fans something to talk about.”

In the opening bout of the tripleheader, undefeated bantamweight prospect Saul Sanchez (12-0, 7 KOs) recorded an eighth-round knockout against Brandon Benitez (14-2, 6 KOs) in an entertaining and all-action fight.

After an even first round, Sanchez and Benitez continued to trade shots over the first three rounds before Benitez’s legs began to betray him and he tired midway through the fourth, slowing the pace of the fight considerably. Sanchez, of North Hollywood, Calif., landed three huge punches that staggered Benitez as the fourth round came to a close, stoking the undefeated prospect with confidence as the fight reached progressed to the later rounds.

In the seventh round, Mexico’s Benitez suffered an injury over his right eye from a Sanchez punch, and referee Raul Caiz Jr. warned Benitez prior to the eight round to protect himself.  At the start of the eighth round, a flush right hand by the 21-year-old Sanchez   connected cleanly and Caiz Jr. stepped in and stopped the fight after just 18 seconds.

“I felt strong throughout the fight,” Sanchez said. “Benitez was tough so I had to be careful and aggressive at the same time. I know I hurt him a handful of times, but I know I can do better. My conditioning was great. I was ready to go the distance.”

Sanchez out-landed the 21-year-old Benitez 145-94 overall and 123-78 in power connects while landing 42 percent of his power shots to Benitez’s 29 percent.

“I was responding well in every round,” said Benitez from Queretaro, Mexico. “I don’t know why the referee stopped it. I had a lot more left. I’m just disappointed I wasn’t allowed to finish the fight.”

Former world title contender Petr Petrov (40-6-2, 20 KOs), who at 36 still campaigns as a lightweight, made easy work of former interim world title-chalenger Ruben Tamayo (27-13-4, 18 KOs) by dropping him three times in the second round to win via knockout at the 2:59 mark.

Petrov, stalked Tamayo from the opening bell and split his guard numerous times with a stiff right. Tamayo looked overwhelmed from the start and was fortunate to exit the fight when he did.

Middleweight contender and 2018 champion of The Contender champion Brandon Adams was interviewed during Friday’s telecast to discuss his June 29 SHOWTIME CHAMPIONSHIP BOXING® showdown with undefeated Jermall Charlo, which was announced earlier on Friday.

“I’m a new face,” Adams told Hall of Famer Steve Farhood. “I’m in the top 10. I’m in the discussion and I think that’s enough to shake everything up. The guy that comes out to nowhere is a great story for boxing.

“I hope I get the best Charlo because I’m bringing the best ‘Cannon.’  I’m very fan friendly and I definitely go for the kill. When I get in the ring I like to entertain myself. I’m very much looking forward to fighting Charlo. It’s going to be exciting.”

Friday’s fights were promoted by Banner Promotions and Thompson Boxing. The full telecast will replay on Monday, May 12 at 10 p.m. ET/PT on SHOWTIME EXTREME and will be available on SHOWTIME ANYTIME® and SHOWTIME on DEMAND®.