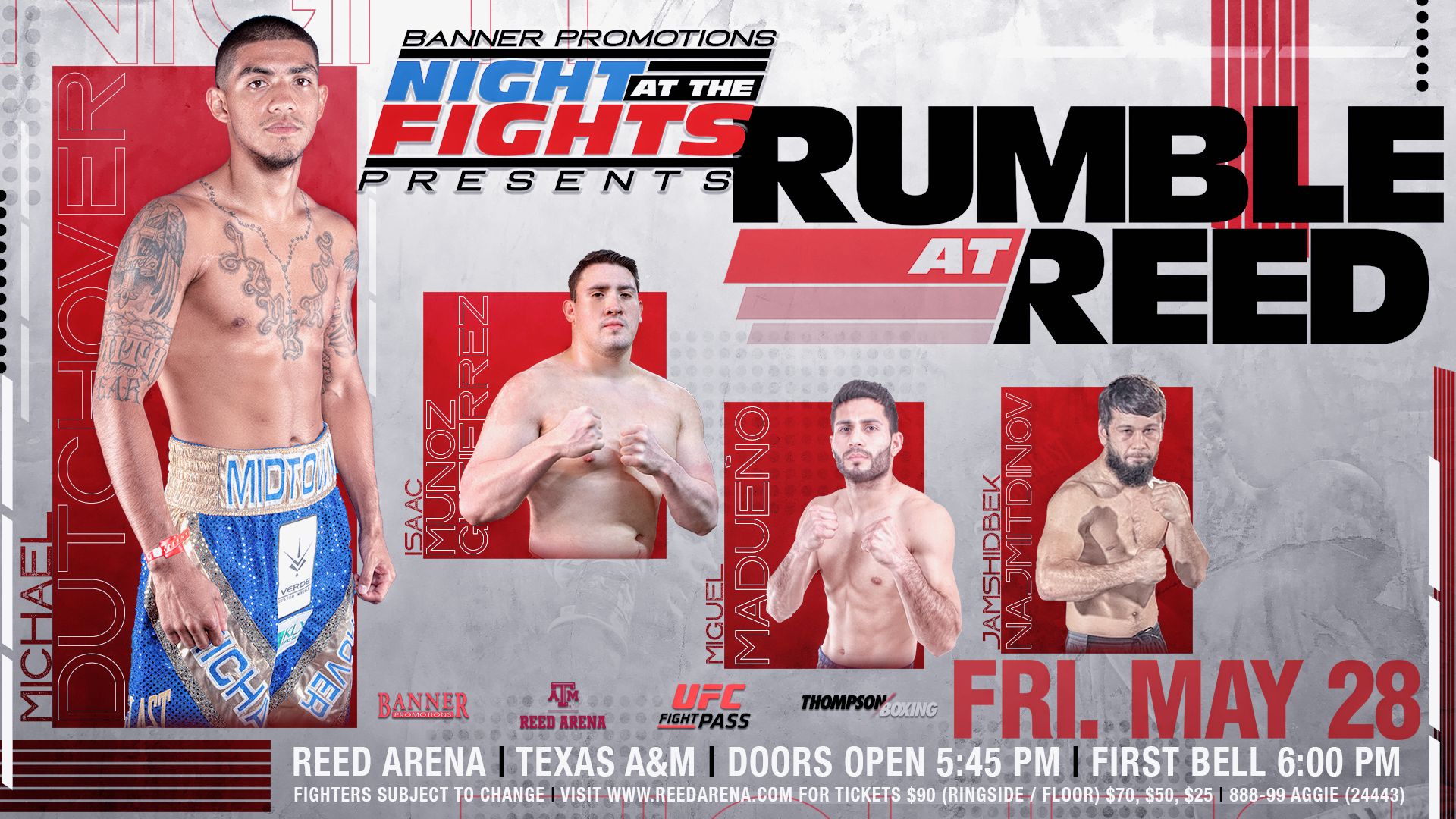 BRYAN-COLLEGE STATION, Texas (APRIL 7, 2021)–Memorial Day weekend promises to start out with a bang, as junior welterweight Michael Dutchover will look to thrill his Lone Star State fans when he takes on Ivan Leon Benitez in the headlining 10-round bout of what will be an explosive night of boxing on Friday, May 28th at Reed Arena on the campus of Texas A&M University and LIVE and exclusively on UFC FIGHT PASS®., the world’s leading streaming service for combat sports. The card will begin at 7 PM ET / 6 PM CT /4 PM PT.

The show is presented by Reed Arena and Texas A&M University and promoted by Banner Promotions and Thompson Boxing.

Dutchover, of Midland, Texas, has a record of 14-1 with 10 knockouts. The 23- year-old turned professional five years ago.

Dutchover is promoted by Banner Promotions and Thompson Boxing.

“In December I was supposed to fight, but I had an injury, and things happen for a reason. I am back in California training and am excited to get back in the ring. There is no place that I would rather fight than in Texas. I will have fans there from Midland and all over the state. This is my fifth year as a professional, and this is the year that I become a contender,” said Dutchover.

Just 20 years old, Benitez is already a six-year professional. He has wins over two undefeated opponents and is coming off a draw with undefeated Francisco Javier Lopez Corrales (12-0) on December 8th in Mexico.

“I will have a difficult task ahead of me in fighting Dutchover, but May 28th will be my day. I will be prepared to give the fans a great show and to beat my opponent. This is what I work for everyday, and he will not derail my dreams of becoming a future champion,” said Benitez.

Seeing action in the 10-round co-feature will be heavyweight Isaac Munoz Gutierrez.

Gutierrez of Mexicali, Mexico is undefeated with a record of 12-0-1 with 10 knockouts.

The 29-year-old Gutierrez, who will be making his United States debut, was a former amateur star in Mexico and competed in the World Series of Boxing.

Gutierrez has stopped his last six opponents and is coming off a first-round stoppage of 35-fight veteran Jesus Alberto Torres Martinez on September 7, 2019 Naucalpan, Mexico.

Seeing action in an 8-round bout will be undefeated lightweight, Miguel Madueno.

Madueno, 22-years-old from Orange, California, has an impressive record of 22-0 with 20 knockouts.

Madueno is a four-year professional who has shot up the prospect rankings with wins over Cristian Flores (7-1-2); Jesus Rendon (13-1-1); former world-title challenger Cosme Rivera; and his last bout when Madueno stopped Jesus Quintero Velarde in two rounds on December 18th in Sonora, Mexico.

Opening up the broadcast will see Jamshidbek Najmitdinov take part in an 8-round junior welterweight fight.

Najmitdinov, of Tashkent, Uzbekistan, has a record of 16-1 with 13 knockouts.

Najmitdinov is an eight-year professional who will be making his American debut.

Najmitdinov has been in several all-action fights, with a style that will appeal to the American audience. The only blemish on his record was a very disputed decision loss to former world champion Viktor Postol. That bout saw Najmitdinov go into the home country of Postol in the Ukraine, and Jamshidbek dropped Postol on two occasions and rocked him several other times during the fight, yet fell short on the judges’ scorecards.

Najmitdinov is coming off a first-round stoppage over Giorgi Khutsishvili on October 6, 2019 to win the WBC CIS Title.

“UFC FIGHT PASS prides itself on being the destination for combat sports fans,” said Crowley Sullivan, Vice President and General Manager, UFC FIGHT PASS. “We’re thrilled to showcase the exciting talent from Banner Promotions to our subscribers. With boxers putting their undefeated records on the line, this action-packed event is one our subscribers won’t want to miss.”

“I am looking forward to working with UFC Fight Pass and Darren Davis with Reed Arena. We are very excited to be putting on this show to kick off a holiday weekend. This show promises to feature fan-friendly fights. When Michael Dutchover fights in Texas, it is always a great crowd, and we are excited about his continued ascent up the rankings. We also are looking forward to getting a glimpse of a future player in the heavyweight division in Isaac Munoz Gutierrez. The fans watching in the arena and around the world are in for a terrific night of boxing,” said Banner Promotions President, Artie Pelullo.

“We are very happy to see the return of Michel Dutchover, and what better place than at the Reed Arena at Texas A&M. Michael will make a run for a world title and this is the best way to get him going,” said Ken Thompson, President of Thompson Boxing.

“We are thrilled to be hosting this marquee fight with Banner Promotions. Adding to a growing list of exciting events we are bringing to Bryan-College Station, this fight will be one any boxing fan will not want to miss,” says Darren Davis, General Manager of Reed Arena.

“We couldn’t be happier to be working with Banner Promotions, to bring a championship event to a great Texas Arena. Reed Arena is going to be a great new venue for boxing, the Gig’Em spirit will be alive and well,” said Daren Libonati of the Libonati Group.

Tickets go on-sale on Thursday, April 8th at 10 AM CT.

TICKETS: Tickets start at $25
Tickets available for purchase online at ReedArena.com or by phone at
888-99-AGGIE (24463) ** venue / ticketing fees may apply.

About Texas A&M Athletics | Home of the 12th Man:
One of the most successful Athletics Departments in the nation, Texas A&M ranked No. 15 in the most recent Learfield IMG College Directors’ Cup standings and is one of eight Division I institutions nationally to finish in the top 20 of the prestigious ranking of athletics success for at least 13 consecutive years. For more information, go to www.12thMan.com.

About Libonati Entertainment Group:
Libonati Entertainment Group is a team of well-versed production, operations, ticketing, promotion, and general site management professionals. We design, create, and produce both public and private events. We have experience and expertise in events ranging from small private events to large-scale 80,000 person festivals. Our event DNA stems from the Arena, Stadium, and Outdoor Festival business. Creating the most economically impactful events over the last two decades at multiple venues in Nevada and across the country.