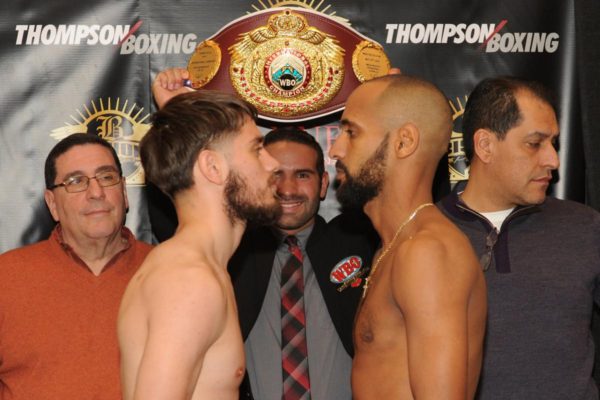 The former two-time Junior Olympic National Champion Villa (17-0, 5 KOs) of Salinas, Calif., will make his fourth ShoBox: The New Generation appearance in just over a year as he faces Cuba’s Collado (25-2, 22 KOs) in a 10-round 126-pound bout. Undefeated Ukrainian and 2012 Olympic Bronze medalist Taras Shelestyuk (17-0, 10 KOs) meets Argentina’s Luis Alberto Veron (18-1-2, 9 KOs) in a 10-round welterweight matchup in the co-featured bout. In the telecast opener, ShoBox veteran Zhora Hamazaryan (9-1-1, 6 KOs) from Armenia has moved over to the “A” side and will face new opponent Uganda’s Sulaiman Segawa (12-2, 3 KOs) who replaces Jerry Perez, who fell out of the fight earlier in the week because of the flu. The lightweight bout is scheduled for eight rounds.

The event is promoted by Banner Promotions, Thompson Boxing and Bishop Promotions LLC. Tickets can be purchased at  www.Bishoppromotions.com  and prices are $20-$100.

“I said in the past it will be one year till I fight for a world title and I think that’s still true.

“I’m ready and can’t wait to display my talents. I’m on ShoBox again and a main event. I want to look good and get the win, so it’s No. 2 on my list to get the stoppage. Getting the win is most important.

“I know there are some boxing fans who appreciate what I do. As far as me being concerned about what others think of me, I don’t care. We work on footwork every day, religiously. Every day for 45 minutes. That’s our priority.

“I’m not running away from anyone in there. I’m progressing and still an exciting fighter.

“I know I look relaxed out here, but I’m locked in. Once I finish all of my interviews I’m back and locked in. The fun starts now because I get to eat.”

“The last time I fought on ShoBox I was undefeated and weight was an issue because I’m not a 135-pound fighter.

“I know how Villa fights: Box, box, box. I have to be smart and we have our game plan. No one has been able to figure him out yet, but we will see. He’s in for a test, and I have the experience.

“The hunger is still there and I have to do this for my family. Because they have supported me and are behind me.

“I come from the Cuban school of boxing which is hit and don’t get hit. I want the knockout. We’re on T.V. so we need to be impressive.”

“I fought on ShoBox in the past but I think I’m more experienced now and had never fought 10 rounds before that. I think I’m mentally stronger.

“I’ve lived in Los Angeles since 2013 when I turned pro. I know I’ve been inactive but it won’t affect me. I’m 34-years-old and now I’m looking for the next big fight, the Keith Thurmans or the Kell Brooks. I want to be back in the mix at 147 pounds so it’s of course important that I look good and I’m looking forward to showing that Friday night.

“I’ve had a long layoff, 22 months. But I’ve always been training. It’s a variety of reasons I was out of the ring. Sometimes the opponent just falls out.
“I’m so excited to be back on ShoBox. Most of the great champion s have fought on ShoBox. I have had a goal since a very young age to be the world champion. I feel my body has served me well over the years.

“Bobby Benton will be in my corner, as well as my brother Bogdan Shelestyuk.”

“I fought just 12 days ago in Argentina so I’m definitely ready for this battle.

“I know I have to correct some mistakes I’ve made in the ring recently, and we went right back to the gym and did that.

“This is my debut in the United States and I’ve fought 20 times in my native Argentina and one time in England. It’s exciting being here, and I’m ready to put on a show. Don’t miss it. It’s going to be fun giving him his first defeat.

“I have more confidence now that I see him face-to-face and he’s not even as big as I thought or as big as me.

“I know I have to make a statement on Friday night. This is a big step-up fight for me and so important for my career.”

“I did recently receive my degree in physical education back in Armenia. Boxing is my life right now, but it’s good to have something to fall back on.

“I have a new trainer now Edmund Tarverdyan and my training camp was the best one ever. He was the Armenian National coach and worked as the former trainer to Vic Darchinyan and Rhonda Rousey. It’s been three months now and things are going great.

“I’m living full-time in Armenia but have applied for my Green Card. ShoBox fans know me from the (Thomas) Mattice fights. Not many agreed with the decision when I lost to him, but I’m just looking to move forward and just looking ahead.

“My opponent is a strong fighter and a southpaw. I’ve fought lots of them so I’ll be ready.

“I’m so excited to be back on ShoBox. It’s a dream come true. I’ve been watching fights on T.V. since I was a kid.”

“I just got called on Monday for this fight, but it’s great and I’m ready.

“My style is unique and I have a ton of weapons. I’ve fought stronger competition than he has and I know this is a fight I can win.

“I haven’t watched my opponent’s past fights but my trainer and my team has. They say he reminds them of my last few opponents and comes forward.

“I’ve fought on short notice before so it’s nothing new. I’m 100 percent ready, and not just physically, but mentally. And sometimes that’s even more important.

“I moved from Uganda to Maryland two years ago and I’ve come to realize that boxing in the U.S. is war. You are under a lot of pressure to win here. They hit to kill. You have to be ready for everything.”