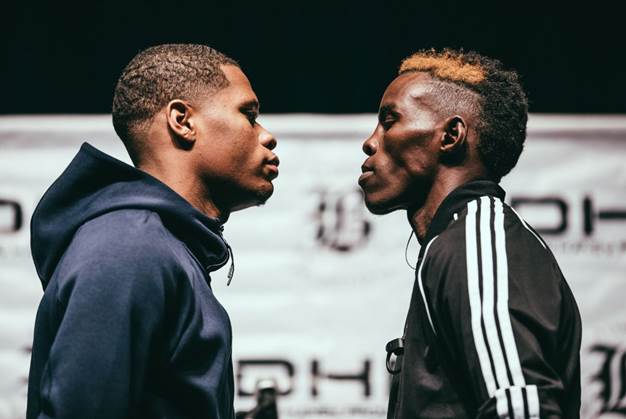 SHREVEPORT, La. (January 10, 2019) –  One of boxing’s most promising rising stars, unbeaten lightweight Devin Haney, and fellow undefeated  Xolisani Ndongeni, kicked off fight week with a final press conference Wednesday at Paradise Theatre in Margaritaville Resort Casino ahead of their ShoBox: The New Generation main event bout this Friday, January 11 at 10 p.m. ET/PT live on SHOWTIME from StageWorks of Louisiana in Shreveport.

The event is promoted by Devin Haney Promotions and Bishop Promotions LLC, in association with Banner Promotions and Thompson Boxing.  Tickets, starting at $30, are on sale now and available at www.akafights.com.

In the ShoBox co-feature, featherweight prospect Ruben Villa (14-0, 5 KOs) will take on Ruben Cervera (10-0, 9 KOs) in an eight-round matchup. The telecast will open with young heavyweights Frank Sanchez Faure (10-0, 8 KOs) and Willie Jake Jr. (8-1-1, 2 KOs) squaring off in another eight-round bout.

Here is what the press conference participants had to say:

DEVIN HANEY
“After this fight I want the whole world to know I’m no longer a prospect. I’m a contender.

“I feel I have something to prove. I’m not just going for the win on Friday night, I want to make a statement. I want to look good. I want to show the world what I’m capable of.

“I think that with a win against a fighter like Ndongeni, the sky is the limit. This fight is going to take me to the next level.”

XOLISANI NDONGENI
“Come Friday night, it’s going to be show time. Because, with all due respect, I’m no pushover and I didn’t come here to lose.

“I’ve been in the game for a long time. I have fought many styles and I’ve seen it all. I’m not scared.

“We are not looking for anything less than a win. I’m not leaving here without one.”

RUBEN VILLA
“I know my opponent is a really good fighter but I don’t feel any additional pressure. This is what we trained for – a tough fight. I’m excited for Friday night. I’m eager to perform.

“Being able to fight on TV is going to finally put me on the map. After Friday night, people are going to be talking about me. They are going to see what I’m made of.”

RUBEN CERVERA
“I’m originally from Colombia and traveling all the way here has not been easy, but we came ready. We had a very successful camp. We did everything we wanted to do and more.

“I’m excited to fight on national television in the United States. I want to showcase what Colombian fighters are made off.

“I know my opponent is good, and undefeated, but only the best man will win, and that is going to be me.”

WILLIE JAKE, JR.
“I’m thankful for the opportunity. This is an important fight for me. During training camp, I took one day at a time, step by step. I’m prepared for the challenge.

“I don’t underestimate my opponent, I will listen to my corner and I will put up a great fight.”

About Devin Haney Promotions:
Based in California, Devin Haney Promotions (DHP) is a first-class promotional company headed by boxing phenom, Devin “The Dream” Haney. The company was founded in September of 2018. Devin Haney at 19-yrs old became the youngest active fighter/promoter in boxing history. DHP has a commitment to bring fans the most exciting shows with some of the best fighters in the world. Globally, DHP is respected as a premier promoter in boxing.