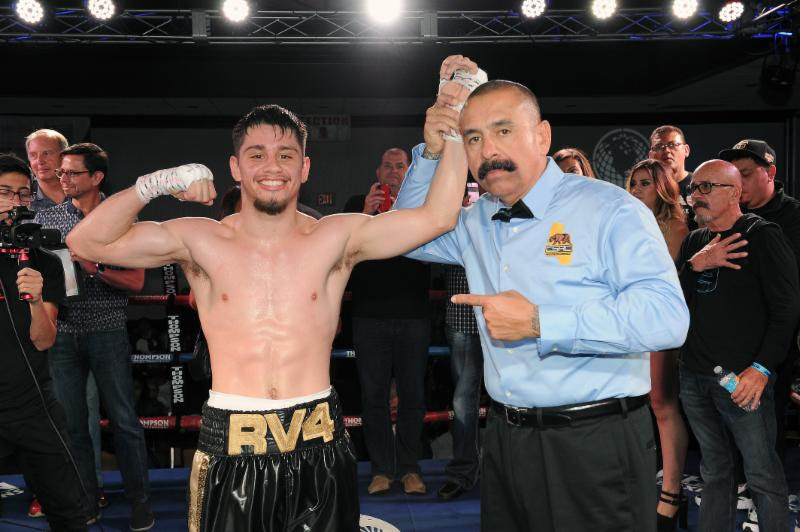 Villa of Salinas, California will take on 103 fight veteran German Meraz in a featherweight bout, while Dutchover of Santa Fe Springs, California via Midland, Texas will fight Anthony De Jesus Ruiz in a junior lightweight contest.

Villa and Dutchover are co-promoted by Banner Promotions and Thompson Boxing.

Both are training in Santa Fe Springs, California and are ready for their 2nd appearances on the East Coast.

Each fighter chimed in with thoughts on their respective battles.

“Everything has gone good in training camp. I just fought four weeks ago, but I stay ready and that is the case now. I am ready for Saturday night,” said Villa.

Meraz is by far the most veteran opponent that Villa has faced. He has been in the ring with 25 undefeated opponents and 9 world champions.

“I just need to be patient against him. He has over 100 fights and knows his way around the ring. If a knockout presents itself then I have to take it, but I want to display my skills.”

Being on a big card has the 20 year-old Villa excited, and he is looking to endear himself to the New York fight crowd.

“I am excited to be fighting on a bigger show. It motivates me to do better and get on the broadcast someday soon. It is very exciting to be on these types of events.”

This will be the ninth bout for Villa in just fifteen months he is very happy about the progress of his career.

“When I signed the plan was to be active, and that has been the case. I would like to get one more fight in this year. But I first I am very excited to put on a great performance on Saturday night.”

Dutchover has moved his camp from Texas to California, and the results have been very good as he heads into his bout on Saturday.

“Everything is going great. I just fought last month, and I felt good. I am ready to go back to the east coast, and put on a great show.”

Like Villa, Dutchover was very impressive in his east coast debut on April 14th, and he is looking to cement himself as one of the top prospects in the junior lightweight division.

“This is nothing new. I have fought on big shows before in the amateurs. The ring is my home. As long as I am in the ring, I will do my thing and put on an impressive performance.”

Even though Dutchover has very little to go on when it comes to scouting Ruiz, Dutchover is already a young veteran and is leaving no stone unturned.

“I do not know much about him, but I am prepared for anything he will bring, and then I will adjust. I have had many different sparring partners with diverse styles, so that gets me ready for any opponent.”

“I planned for this, and I train hard. I am always ready when I get the call for a fight. I am glad that I have been busy, and I have been improving with each fight, and next year should be a good year in my career. I have a mentality that if I train hard, the fight is easy. When I get in the ring, I just like to have fun.”