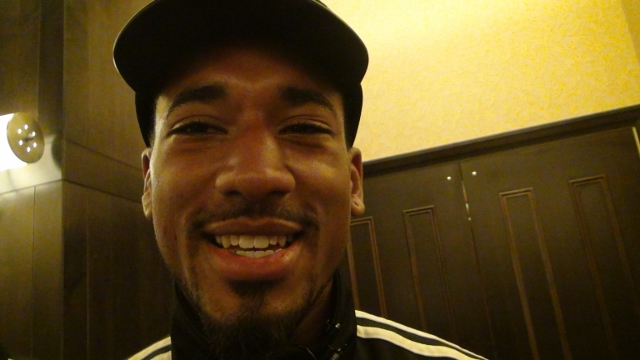 Both men are former Amateur World Champions who have gone on to claim World honours as professionals. Culcay, who claimed the WBA strap with a unanimous pints decision over Maurice Weber on May 9, 2015, will be making a third defence of his title against Andrade, a former WBO World Champion.

At a press conference yesterday in Ludwigshafen, Culcay and Andrade, who was appearing via video link, exchanged words for this first time prior to their super welterweight showdown with most of the talk surrounding their 2007 bout at the Amateur World Championships in Chicago.

‘’Last time we fought at the Amateur World Championships in Chicago the judges clearly favoured the home fighter,’’ said Culcay. ‘’They gave him point after point when in reality it was a really close fight for the first two rounds. He beat me and won the gold that year, but now it’s my time for revenge. We will be fighting on a level playing ground in Germany and I will prove I am one of the best boxers at 154 lbs.’’

“Hey Jack, remember 2007,’’ said Andrade. ‘’Back then we were just two young guys, greenhorns without much power, but I already made easy work of you. This time we’re grown men with punches that can hurt badly. You better get ready to be dominated again. Boo Boo is going to make your World title disappear!’’

‘’This is one of the most hotly anticipated fights to take place on German soil for many years,’’ said promoter Kalle Sauerland. ‘’It is an exciting match up. Both men have reached the pinnacle in amateur boxing and have won World Championships as professionals. No doubt, their amateur history will add extra spice to the battle. March 11 is judgment day, and we will see if it is repeat or revenge?’’

Tickets for the WBA World Super Welterweight Championship clash between Jack Culcay and Demetrius Andrade are available online via www.eventim.de or by calling the ticket hotline on 01806-570044.