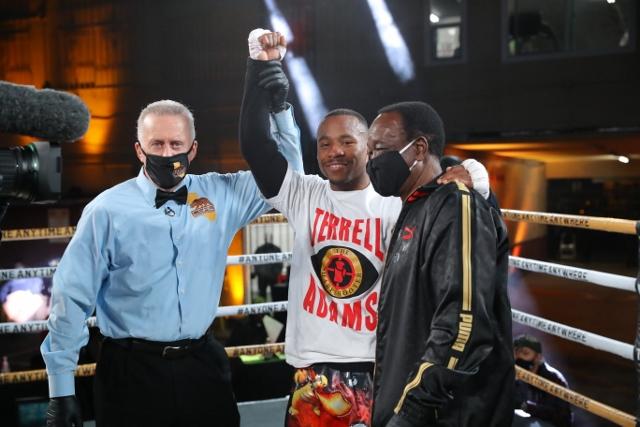 December 4, 2020 – Former world title challenger and winner of The Contender, Brandon Adams destroyed Sonny Duversonne in round two of a scheduled eight-round junior middleweight bout that headlined a Ring City USA Card at The Parking Lot of the famed Wild Card Boxing Club in Hollywood, California.

Adams, who is promoted by Banner Promotions and The Tournament of Contenders, came out strong in round one, as he worked the body of Duversonne then came upstairs to land some solid shots to the head. In round two, Adams landed a crushing left hook to the jaw that froze Duversonne on the ropes. A follow-up barrage of power punches forced referee Jack Reiss to stop the fight at 1:40.

Adams of Watts, California was making his first start since his valiant effort against WBC Middleweight champion Jermall Charlo, embedded himself as a title contender in both the 154 and 160 pound divisions.

With the win, Adams raised his record to 22-3 with 14 knockouts.  Duversonne, who had never been stopped before, falls to 11-3-2

“My game plan stayed the same from the beginning – to seek and destroy,” Adams continued. “I wanted to come out and win, and it didn’t matter who was put in front of me.”