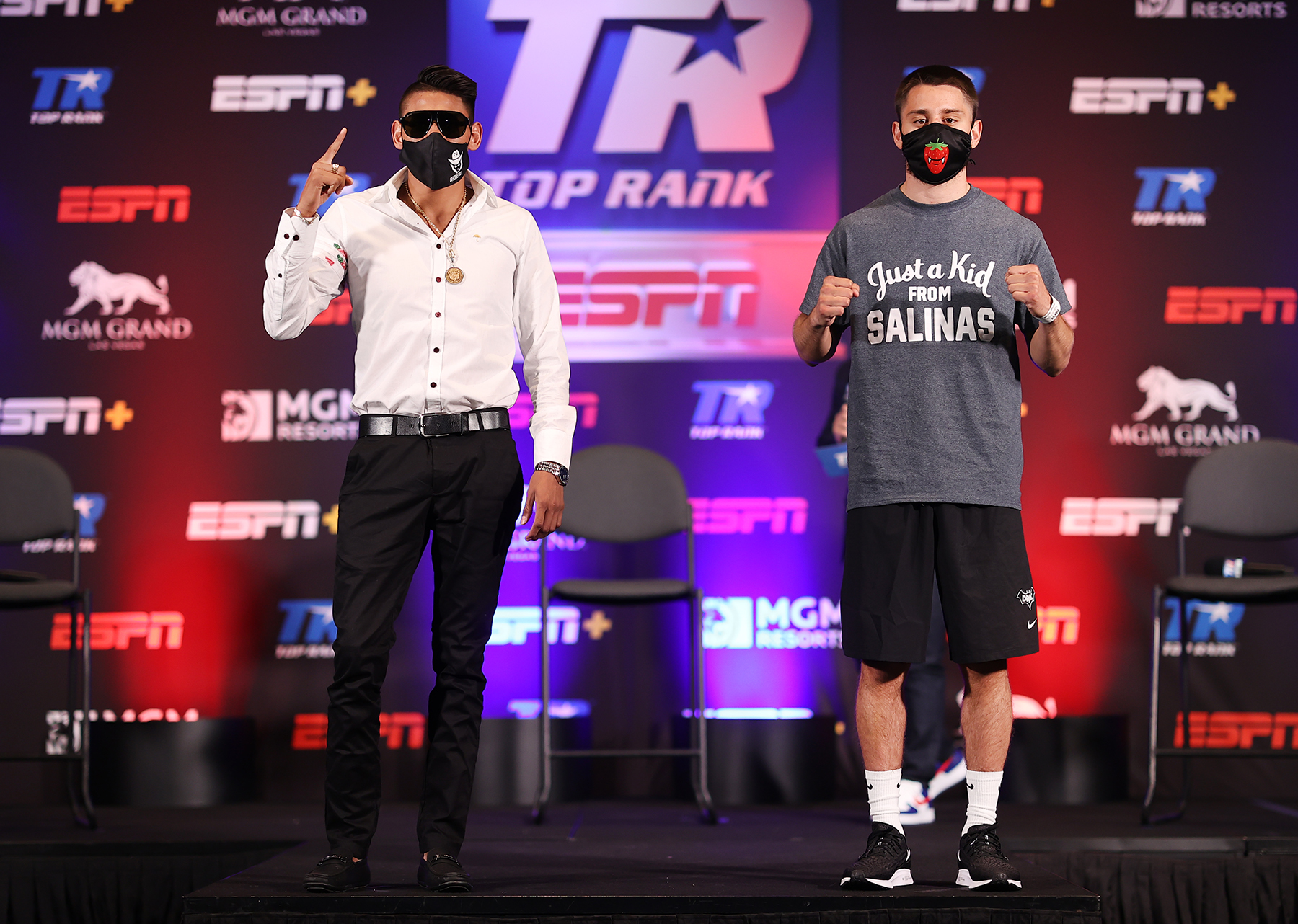 Undercard bouts to stream on ESPN+ beginning at 7:15 p.m. ET

LAS VEGAS (October 7, 2020) – Emanuel “Vaquero” Navarrete has won 27 consecutive bouts. Ruben Villa has never lost as a professional. Something will give Friday evening (ESPN, 10 p.m. ET), when the two battle for the vacant WBO featherweight world title, which became available after Shakur Stevenson moved up to the junior lightweight ranks.

Navarrete (32-1, 28 KOs) reigned as WBO junior featherweight world champion and became boxing’s most active world champion. He made five defenses of the title he won from Isaac Dogboe in a nine-month span and most recently knocked out Uriel Lopez in a June non-title bout in Mexico City.

Villa (18-0, 5 KOs), from Salinas, Calif, who is promoted by Banner Promotions and Thompson Boxing, earned this title shot with wins over the likes of Alexei Collado and Jose Enrique Vivas, but Navarrete represents a giant step up in class. Villa fights for his Salinas Valley home region, which has been ravaged by wildfires in recent months. The poor air quality has forced him to wear a mask during roadwork. The field workers are still out there, providing Villa with ample motivation as he awaits his first world title opportunity.

At Wednesday’s press conference, this is what Navarrete and Villa had to say.

“There have been a couple of restrictions and stuff due to COVID, but I’ve been in the gym, I’ve been active. It hasn’t gotten in the way of me training and my team’s training. Yeah, we trained hard, another hard camp, and we’re ready for Friday night.”

“My last couple of fights, they’ve been aggressive guys who come to beat me and think they’re going to get me off my game plan. But I adapted well. We always had good game plans and stuck to game plans, and now we’re here fighting for a world title. I feel like I’m ready. I feel like he’s beatable, and my style is the one to do it.”

“He’s an aggressive guy who throws 100 punches a round. I feel like it’s just going to bring the best out of me to do my job as well as I can.

“I feel like you’re going to see a bigger and better Ruben Villa this Friday.”

“Running with the mask on, seeing the field workers working during the pandemic and fires, it’s just another motivation for me to win this fight and bring Salinas its first world title. I just can’t wait to show you guys what I got.”

“I want to see the best Ruben Villa. I haven’t even seen him yet. I feel like Navarrete will bring it out of me. I’m just excited to perform and, like I said, show you guys what I got. I feel like I’ve been slept on. Maybe a lot of people think I don’t belong here, but I’m going to show everyone I’m an elite 126 fighter. Yeah, I’m coming to win and coming to fight.”

“With the current situation and the camp we’ve had, {my team} has done a great job. We’ve worked through it, and we’re ready for this match.”

“My body is doing a lot better. I’m growing a little bit more. It was getting a little bit difficult making 122, but now going up to 126, I think I’m more prepared for that.”

Use the hashtag #NavarreteVilla to join the conversation on social media.