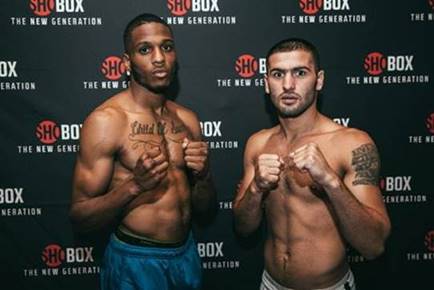 WHAT:  A day before their highly anticipated rematch, SHOWTIME Sports  ®  has released highlights from the July 20 first matchup in Iowa of what many have called one of the most widely disputed fights of 2018.

Cleveland lightweight contender  Thomas Mattice  (13-0, 10 KOs) survived a second-round knockdown and was awarded the split decision over Armenian and Los Angeles-based Zhora Hamazaryan (9-1, 6 KOs). Mattice connected on 57 of 178 power punches during the fight, compared to Hamazaryan’s connecting on 100 of 346.

Two judges scored the fight 76-75 in favor of Mattice with the third judge scoring it 77-74 in favor of Hamazaryan.

“He didn’t win the fight,” ShoBox analyst and boxing historian Steve Farhood said after the scores were read in favor of Mattice. “That’s all I can say. Scoring is subjective, I understand that and say that quite a bit, but it was a bad decision.”