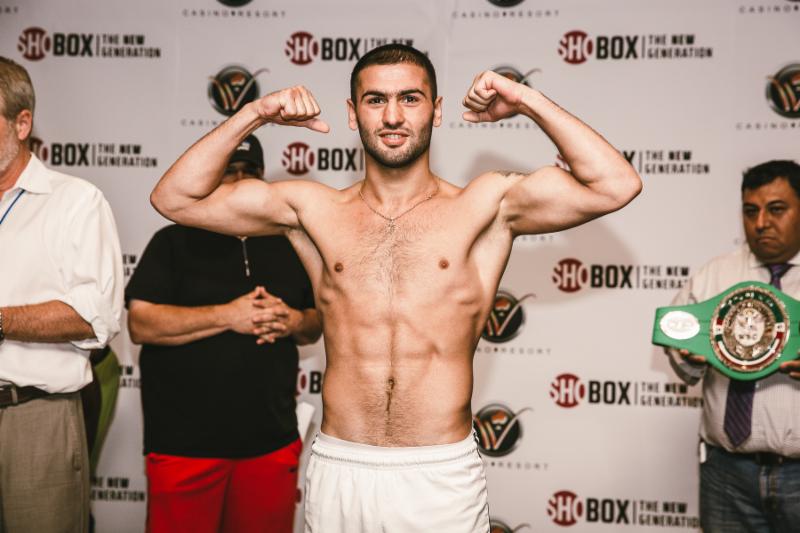 PHILADELPHIA, Penn. / ORANGE, Calif. (July 23, 2018) – Artie Pelullo, co-promoter of lightweight Zhora Hamazaryan will be appealing the outcome of last Friday’s Zhora Hamazaryan – Thomas Mattice fight with the Iowa commission.
Pelullo spoke to Iowa Commissioner Joe Walsh right after the fight on Friday, which took place at the WinnaVegas Casino.
The bout was seen by a nationally televised audience as the co-feature of a ShoBox: The New Generation card on SHOWTIME.
In the fight, Hamazaryan scored an explosive 2nd round knockdown; rocked Mattice several more times, and dominated the action.  Hamazaryan badly hurt Mattice in round seven.  Most people who saw the fight, thought that Hamazayan won 6 rounds to 2, plus the 2nd round knockdown.
Hall of Fame SHOWTIME announcer Steve Farhood called the the decision the one of the worst in the history of the series, while his fellow Hall of Fame broadcaster Barry Tompkins went even farther by calling it the worst decision in 40 years.
https://twitter.com/ShowtimeBoxing/status/1020524211121655809
Hamazaryan co-promoter, Artie Pelullo said,  “I spoke to commissioner Joe Walsh right after the fight.  I informed him that we were going to appeal the decision, and he understood our position, and he said that we are within our rights to appeal.”
Hamazaryan is promoted by Banner Promotions and Thompson Boxing.
Below are just a sample of the articles and social media reaction from this injustice:
https://www.boxingscene.com/mattice-wins-suspicious-split-nod-over-hamazaryan-results–130151
https://www.boxingscene.com/promoter-file-protest-over-suspect-shobox-result-friday–130216
https://www.ringtv.com/539952-jaron-ennis-impresses-zhora-hamazaryan-gets-robbed-on-shobox/
https://fightnews.com/mattice-hamazaryan-aftermath/25775
http://www.boxingtalk.com/pag/article.php?aid=35486
https://roundbyroundboxing.com/jaron-ennis-knocks-out-armando-alvarez/
https://www.fightful.com/boxing/shobox-next-generation-results-720-controversial-judging-overshadows-event
https://fightnews.com/ennis-destroys-alvarez-in-three/25776
https://twitter.com/steveucnlive/status/1020689666670878721
https://twitter.com/steveucnlive/status/1020690665292742658
https://twitter.com/CommishRandyG/status/1020661697932152833  (Gordon was the former New York State Boxing Commissioner)
https://twitter.com/loudibella/status/1020519733991485441
https://twitter.com/TheLatinSnake_/status/1020512531398373376
https://twitter.com/rosieperezbklyn/status/1020809743026343937
https://twitter.com/GoldenCalebT/status/1020512381774987264
https://twitter.com/stevelillis/status/1020522005261692928
For regular updates on our fighters, events, and promotions, please like the Banner Promotions Facebook Page, and follow us on Instagram and Twitter @BannerBoxing.
Tweets by BannerBoxing