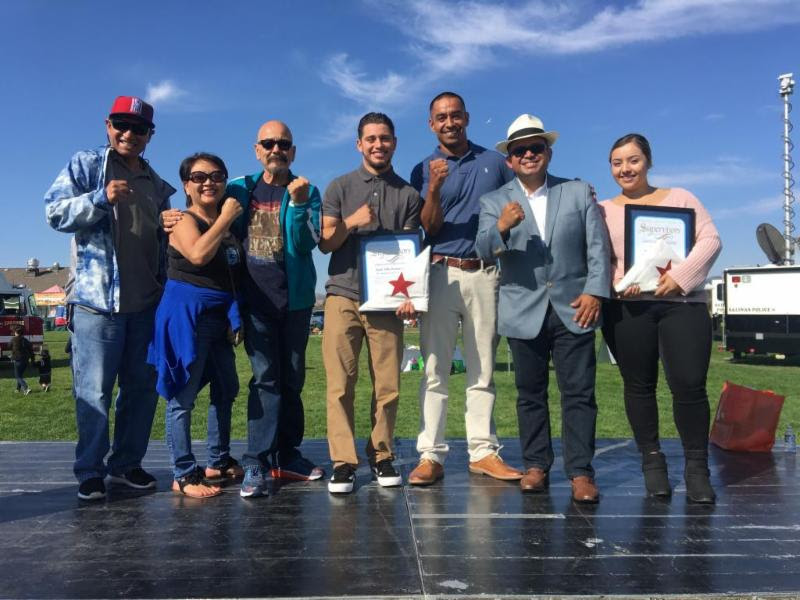 ORANGE, Calif. (Aug. 10, 2017) – Ruben Villa (7-0, 4 KOs), one of boxing’s brightest, young talents in the featherweight division, recently received an award for his community building presence in his hometown of Salinas, Calif.

“I was really surprised that we were honored with the award because we only found out about it the day before,” Villa said. “We are obviously very happy about it, but we don’t do it for the recognition. It’s all about helping the community. There’s not much opportunity out here so we have to give the kids additional chances to succeed.”

“Ruben cares about his community and wants to be a positive role model to the local kids,” said Danny Zamora, Villa’s manager. “The gym offers a safe and productive outlet for young kids and keeps them from getting into trouble.”

For those that are unaware, Salinas has an ongoing struggle with drug related gang violence. The Villa family, in an effort to pull local kids away from a life of crime, formed the gym three years ago. When not conducting training camps in Riverside, Calif., Villa stays sharp at the gym that bears his name.

Villa received the honor as part of the “National Night Out” event hosted by the City of Salinas.

The public awareness event, which drew thousands to the Salinas Soccer Complex, aimed to strengthen community relations with law enforcement and other public safety personnel such as firefighters and first responders.

Villa marks his return to the ring on a Thompson Boxing card Friday, Sept. 22 from the Doubletree Hotel in Ontario, Calif. An opponent will be announced at a later date.

Villa is promoted by Banner Promotions and Thompson Boxing.