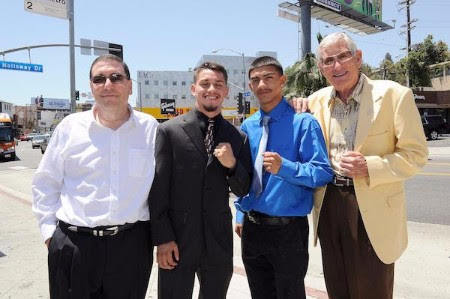 Villa and Dutchover will fight on the non-televised undercard portion of an event that features the live SHOWTIME telecast of undefeated Dmitry Bivol defending his interim WBA Light Heavyweight title against Samuel Clarkson in the 12-round main event of a ShoBox: The New Generation tripleheader (10 p.m. ET/PT). In the co-feature, unbeaten welterweight prospects Juan Ruiz and Malik Hawkins will square off in an eight-round bout, and Baltimore’s undefeated featherweight Glenn Dezurn will open the telecast.

Tickets for the event, which is co-promoted by Greg Cohen Promotions and Banner Promotions in association with World of Boxing and Uprising Promotions, are priced at $103, $73 and $48 and can be purchased at www.TicketMaster.com.

Villa has a record of 4-0 with two knockouts and will be looking to continue his winning ways on April 14th.

The two-time National Golden Glove winner, turned professional on July 29th with a 1st round stoppage over Gerardo Molina, and his young career has been highlighted by a four-round unanimous decision over previously undefeated Aaron Lopez (4-0).

The 19 year-old Villa had a steller amateur career, which consisted of the aforementioned Golden Gloves wins, but also he was a champion of the Desert Showdown, National PAL, Silver Gloves and two-time National Silver Gloves champion. He finished 2nd in the 2015 Olympic Trials and finished up his amateur career with an astonishing 164-17 record. Ruben split four amateur contests with eventual 2016 Olympic Silver medal winner Shakur Stevenson.

“I am pretty excited to be on this card. I trained three weeks in Big Bear, California. I have had great sparring, and this has been a really good camp,’ said Villa.

“This is a real exciting opportunity. I am just going in there and do what I do best, and look good in front of the East Coast fans.”

Dutchover began his career by stopping previously undefeated Cesar Partida in three rounds on October 21st . He has stopped all three of his opponents, which includes a devastating 1st round stoppage over Jose Mora on February 10th.

“I am excited for this opportunity to fight on the East Coast. I am looking forward to showing my skill set to a new audience,” said Dutchover.

“This is my first big card where there will be a world title on the card and I will be prepared more then I ever have. I am in great condition and I am ready to show my talent on the other side of the country.”

“It is most important that I get this win, and if I can get my 4th straight knockout, that would be great. I am just looking to set up my shots and put on a great performance.”

“They have thrilled fans in California over their first handful of fights, and now fans on the East Coast will get to see why we are very high on Ruben and Michael. Fighting in different parts of the country will help raise their profiles, and we expect them to have terrific performances on April 14th.”

Villa and Dutchover are promoted by Banner Promotions and Thompson Boxing.