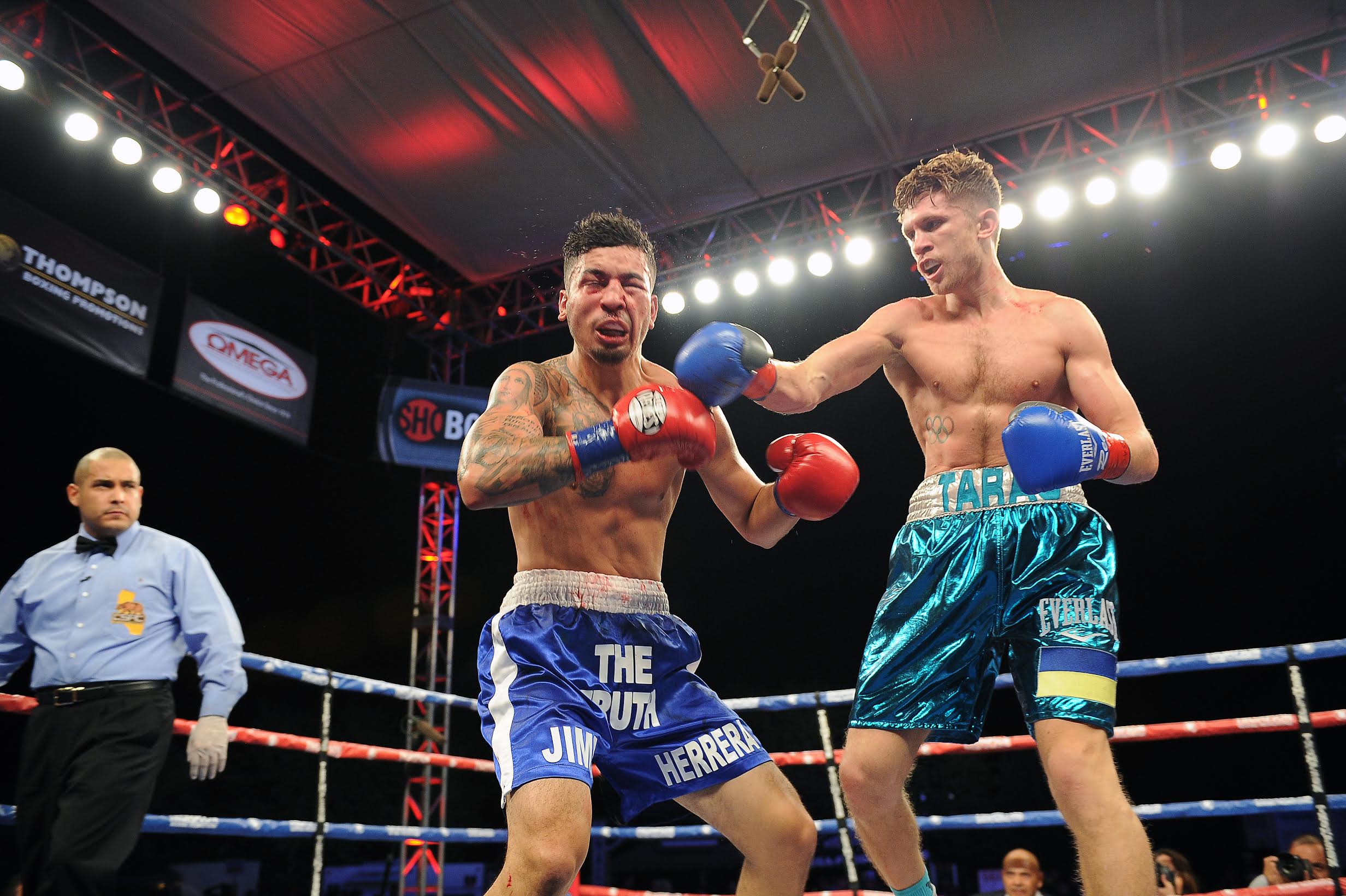 Southpaw Shelestyuk, who entered the ring ranked No. 9 in the WBO and No. 13 in the WBA, turned back a determined bid by Herrera to win, despite getting docked a point for excessive holding in the fifth round.

“It was a tough fight,” stated Shelestyuk. “He is a tough fighter; he is slow, but he worked well. In the first round, I did well but my legs went on me. I think it was because I did not sleep well.

“After five rounds, I started to find my rhythm. I started boxing him. I made some mistakes in there like pulling straight back. This fight will make me better. Like I said, he was tough but nothing special. When my legs went, I started to work inside. I beat him good in the last round and if there was 30 seconds more, I could have stopped him.

“I am looking forward to being more active in 2017. I will take two or three weeks off and be right back in the gym.”

“The Truth” hurts, and Herrera had more than his fair share of moments in a tight fight. Herrera, a professional since December 2009, figured to be a legitimate test for Shelestyuk, and he was. But Taras was more active, (landing 169 of 689 punches, compared to Herrera’s 130 of 460). Each fighter connected 28 percent of the time.

Herrera, who had defeated undefeated prospects in four of his previous nine fights, was not happy with the verdict. “It was a good fight. There is not much that I can say. I thought it was closer than the scores indicated. I had fun in there, and I give him credit. He was everything I expected. He is a smart fighter.”

“I would love to be a test dummy for all these young prospects. I thought it could have been a draw, but the people who saw it on TV can have their opinion.”

Shelestyuk is co-promoted by Banner Promotions and Thompson Boxing.

Opening up the ShoBox broadcast, Vitor Jones Freitas was stopped in the first round by Manuel Mendez. The fight was stopped after Mendez landed a thudding body shot that sent the previously undefeated Brazilian down for the ten count, breaking his rib.

In non-television action, Ndongeni showed why he is considered championship worthy, as he pounded out a ten-round unanimous decision over rugged Juan Garcia Mendez.

Ndongeni controlled the action as he mixed up his punches. He countered beautifully and worked up and down by mixing up his shots to the head and body of Mendez. Ndongeni, 26 years-old, is ranked number-3 by the WBA, and he showed the class of a world championship contender in his American debut.

Ndongeni, nicknamed “Nomeva”, which means The Wasp, stung Mendez throughout the contest, and he showed that not only is he a serious title contender, but he has a fan-friendly style.

Ndongeni is co-promoted by Banner Promotions and Golden Gloves Promotions.

Villa, of Salinas, California, was taken the distance for the first time, as he won a 4-round unanimous decision over previously undefeated Aaron Lopez.

Villa, who previously scored two consecutive first round knockouts, won every round by showing off his boxing skills in the battle of undefeated fighters.

The 19 year-old Villa pushed the pace throughout the fight and had Lopez in trouble several times. Villa has been very active, as this was his 3rd win since turning professional on July 29th.

“These are three guys at different stages, but I believe that all three have the talent to become world champions. Taras is closing in on a significant fight, for which a win will lead him to a title. This was our first look at Xolisani, and he was the fighter that was advertised. He has a lot of skills and is a versatile. My partner Rodney Berman and Iwill now look at the many options that we will have with him. I do expect him to fight for a world title sometime in the next year. Ruben had a tremendous learning experience. He fought a guy who was undefeated and very durable. He actually showed us more in this fight than he did in his two first round knockouts. In this fight he won all four round on every judges scorecards (40-36 on all cards). I was very impressed with the different punch selections and the way he set everything up in there. As I have said before, he is a star in the making. As for Vitor, he had the right attitude following the fight. He is not going to let this deter him. He just got caught with the wrong punch at the wrong time. He was winning the round easily before that happened. He will obviously take some time off, and then we will look to bring him back next year.”