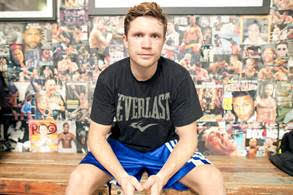 A 5-foot-10 up-and-coming rising star, Shelestyuk, of Los Angeles, is ranked No. 9 by the WBO and No. 13 in the WBA. Shelestyuk, who is making his second ShoBox start, averaged 85 punches a round en route to winning his ShoBoxdebut with a 10-round division over Aslanbek Kozaev on Nov. 6, 2015.

Shelestyuk was a member of a vaunted 2012 Ukrainian Olympic team that included featherweight gold medalist Vasyl Lomachenko and heavyweight gold medalist Oleksandr Usyk. The 30-year-old feels he’s still about a year away from competing against the best at 147 pounds and that he first must get by Herrera. But Mosley claims Shelestyuk reminds him of a bigger Lomachencko and believes he’s already ready for the top names in the welterweight division.

Shelestyuk, Brown and Mosley spoke to SHOWTIME after a recent workout. Here’s what they said:

TARAS SHELESTYUK:
What are your thoughts going into the fight?
“I’m very excited. It’s been six months since my last fight. It’s my first headline fight and hopefully not my last one.

“I’ve been putting in a lot of work in my training camp with my trainer Eric Brown, and with my physical conditioning coach. My opponent is a tough fighter. He’s had some good fights with guys like Mike Jones, Egidijus Kavaliauskas and a couple of other big guys. He likes to fight and I think it will be a good fight and a good matchup for our styles.”

You’re now a ranked fighter; are you happy with the pace of your progression?
“I’m happy with my progression but of course I want to fight bigger names in championship fights and all of that. I know it’s coming soon. I enjoy my way of training and developing my skills, but if you see your dream you do anything to reach it and don’t let anything get in your way.”

What do you think of the welterweight division?
“It’s a very good division because there are a lot of fighters, but some don’t want to fight each other (very often). There are some very good championship fights to be made and hopefully I will be one of them.”

Why did you chose to move to Southern California?
“Well, [laughs] mainly because if the great weather, but this is also a good area with a lot of good fighters and a lot of good trainers as well. When I first moved here my manager invited me out and showed me around and I got in the gym right away. I was training with Ruslan Provodnikov and got some sparring in with him before a fight that he had and next thing you know, two weeks later I had my pro debut and now three-and-a-half years later here I am.”

Is there pressure on you when you fight?
“I wouldn’t say I feel pressure because everyone around me is supporting me, they believe in me and I believe in them. My team believes in me and I trust them. I just want to do what I do in the ring, better. I want to do better for me, for my family and for my friends.”

Do you follow your Olympic teammates?
“I watch fights of the Ukrainian Olympic Team, and I enjoy when the other guys win. We support each other and we call each other. It is good for there to be more Ukraine fighters who are champions now. Next year, I hope to be one of them.”

How did it feel going 10 rounds for the first time?
“Last year in November I had my first 10-round fight on ShoBox, I fought with a strong guy and he gave me a very good fight. I went the 10 rounds and I felt like I could still go two more. I am ready for 10, for 12, it doesn’t matter. I feel much better, much more powerful. I have more speed than I had in my last fight, too.”

How did you end up training with Eric?
“I trained with Freddie Roach for about two and a half years when I met Eric at Wild Card West Gym. I started sparring with some of his guys there. After my fight with Rodriguez on ESPN in 2015 I asked Eric to train me and we started working. Now that I’ve fought two fights with him as my trainer, I feel my boxing skills are better, I feel more powerful and I enjoy training in his gym.

“All of the trainers help us and they give us advice. On the days I spar with Shane Mosley he stops and gives me some advice. I learn a lot from him, being the fighting legend that he is. I grew up watching him fight as a kid and respect what he’s able to teach me. Then the next time I try what he has taught me and it works.”

Boxing is in your blood; your dad and brother boxed. When you were younger, did you think you were going to become a fighter?
“No, but my father pushed me in a lot of sports. I did gymnastics, soccer for five years, and played chess. I fought as a kid but it was always friendly. I always enjoyed the training aspect. To train for soccer sometimes my father and I would run barefoot in the snow and I enjoyed it. So, as a kid, when I first stepped into the boxing gym, it was just so much fun.”

Your ShoBox fight falls on your father’s birthday; do you have a special present in mind for him?
“It makes me want to get the victory for him. On his day, he will be sitting and watching my fight so I want to get that victory for him, for my family and for the Ukraine.”

ERIC BROWN, Shelestyuk’s trainer
What kind of camp has Taras had has had and what do you see happening on Friday?
“I see a lot of progression in Taras. When we first started working together, one of the things was that Taras always had great boxing ability, but he wasn’t a great finisher. I don’t know if he was gun shy or what it was but he had a tendency of using his talent to get people in trouble but then he would stand back and let them get back in the fight. So, what we’ve been working on a lot more is getting him to become a better finisher and recognize when he has his man in trouble and how to seize the moment, without being reckless at the same time. He’s improving at a fast pace.

“A lot of guys from Ukraine seem to have similar tendencies because they have long amateur careers and they start picking up bad habits that we need to correct. Taras had a little bit of that in him but he seems to be making the adjustments very well. He’s an extremely hard worker and you often have to tell him to slow down, you never have to tell him to do more.”

Where do you see him in his career as a welterweight?
“It’s a great division. I’d say that Keith Thurman tops it without a doubt now but there are good fighters like Shawn Porter too. If Mayweather decided to come back, I think he would be all over this division again. Canelo is a good super welterweight, but he’s too busy worrying about catch-weights. Undoubtedly in another year, I think Taras will be right there with the best of them. He’s got a lot of talent, great versatility, great hand speed and foot speed and he’s a good puncher. Not a devastating knockout puncher but a great puncher nonetheless with both hands.”

SHANE MOSLEY, Former World Champion
How has it been working with Taras and how did you become involved in his training?
“I have been sparring with Taras and he’s looking really sharp. I’ve been sparring with him for about four or five months now pretty consistently because a lot of guys won’t spar with him. Guys are worried that he will make them look bad; he’s so technical and sharp that they don’t want to spar with him. So, I go in there with him a lot. It’s hard to get people to spar with him.”

Where do you see him in the welterweight division?
“He’s on that championship path, that level, but I think once he gets there, he’ll get more sparring partners and will get even better. He really is a world champion, a world-class fighter. He reminds me of a bigger Lomachenko, sparring with him is just like that. I see him as a top welterweight champion. The way he throws his combinations, he’s a smart boxer who works out very hard. He’s at the gym every single day, whether he’s sparring or not, whether he has some training to do or not. He’ll even be here by himself just moving around and staying sharp. His work ethic is really, really strong.

How do you like working with Taras?
“I like Taras and I enjoy working with him. He’s extremely dedicated and that’s hard to find. I like Taras’ work ethic, his personality, how he takes to boxing. He loves this sport and he wants to be the best. He doesn’t like to lose, even in sparring. I’m impressed with him. When I sparred with him for the first time I was very impressed at his swing, his power, his ring accuracy, his IQ of boxing. I was impressed with how hard he worked and his willingness to learn.”

Do you find it unusual for guys to be as dedicated as Taras at this point in their careers?
“It’s unusual in the sense that a lot of fighters want to learn from the top guys but it seems to me with Taras that it’s not fake. He truly does want to learn about boxing so that he can be the best. He wants to become a world champion and is working to become one of the best. If you put Taras in the ring with any big name today and I’d say he would take the victory. He has a sound mind. He has the mentality to be at the top. He’s serious about being the world champion, about being the top fighter. He’s serious about winning and he’s going to take it all the way to the end. If you put this guy against Thurman, I’d go with him. I think he beats Thurman right now.”

Tickets for the event promoted by Banner Promotions, Thompson Boxing, Hitz Boxing and Joe DeGuardia’s Star Boxing are priced at $100 (ringside), $70 (reserved) and $50 (general admission) and can be purchased by calling (714) 935-0900.

In the ShoBox co-feature, undefeated cruiserweights Constantin Bejenaru (11-0, 4 KOs, 0-1-1 in World Series of Boxing), of Catskill, N.Y. by way of Moldova, and Steve “Superman” Bujaj (16-0-1, 11 KOs), of New York, will collide in a 10-rounder for the vacant WBC International and WBC Continental Americas titles. Unbeaten lightweight Vitor Jones Freitas (12-0, 1 ND, 6 KOs), of Salvador, Bahia, Brazil, will be opposed by local fan favorite Manuel Mendez (12-1-2, 8 KOs), of Indio, Calif., in an eight-round bout in the opening bout of the telecast. Freitas, 23, is the nephew of popular former two-time lightweight world champion Acelino “Popo” Freitas.