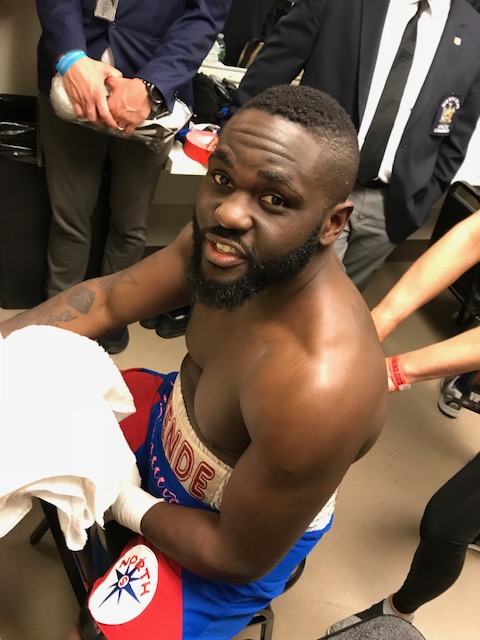 Katende, of Sweden, was born in Uganda and competed in the 2008 and 2016 Olympic Games.

Katende has an unblemished professional record of 4-0 with 1 knockout.

The 33 year-old began fighting at the age of 12 after his mother passed away.

“We moved to Sweden, and it was hard for me.  I started to gain weight, and my father made me run to get back in shape. My older brother started boxing and I followed him to the gym. My father was hard on me to lose the weight, and I started to box, just so I wouldn’t have him yell at me while running,” said Katende.

Katende then went on to have a very successful amateur career where he won approximately 175 of 200 bouts.

Katende qualified for the 2008 Olympics for his birthplace of Uganda, but lost to current IBF Light Heavyweight champion Artur Beterbiev. Katende was the only fighter to go the distance with Beterbiev. Katende also participated in the 2016 games.

Katende fought in the World Series of Boxing where he had a record of 11-2.

Katende turned professional on November 26, 2016 with a four-round unanimous decision over Tracey Johnson.  Katende has wins over undefeated Lyubomyr Pinchuk (4-0) and his last bout where he defeated hard punching Luther Smith (10-2) on April 21st in Brooklyn.

“I signed with Banner Promotions, because I have heard good things  Artie Pelullo called me, and that meant a lot to me. I know Banner Promotions is a big promoter that has a lot of success with European boxers. I know Artie has heard a lot about me, and I know that he can get me to a world title.

“I have had tough fights. My last fight I took on two days notice. That shows that I am willing to fight anyone.”

Katende, who has been fighting at cruiserweight, will campaign at light heavyweight.

When describing his style, Katende says he is really fast and has good reflexes. He likes to box from both the orthodox and southpaw stances.

The articulate Katende is studying to become a Physical Education teacher in Sweden and is a personal trainer.

Katende has one daughter and raises three more children with his girlfriend in Sweden.

“We are excited to have Kennedy in the fold,” said Banner Promotions President, Artie Pelullo. “He is a very good prospect with a terrific pedigree. We look forward to getting him in the ring and have him in meaningful fights and eventually a world championship.”