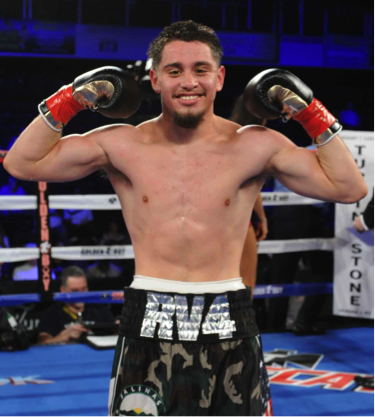 Ruben Villa (11-0, 4 KOs)–One of the hottest young prospects in boxing right now. In July 2016, the amateur sensation signed with Banner Promotions and Thompson Boxing, and he has quickly established himself as one of the top young fighters in the sport.

Villa began back at the age of 5, when family members, who were huge boxing fans, took young Ruben to a boxing gym. He is the second oldest of four sisters and was influenced by Vasyl Lomachenko and Canelo Alvarez. Villa has sparred with many top professionals including world lightweight contender Petr Petrov.

In his professional debut on July 29, 2016 in Ontario, California, Villa did not waste any time putting away challenger Gerardo Molina (1-2, 1 KO). Villa landed a counter left hook early in the first round that sent Molina backpedalling onto the canvas. Seconds later, Villa rocked Molina with a series of punches, knocking him out at the 2:25 mark of the opening round.

“It felt great to get that first win,” Villa said. “I didn’t go in thinking knockout, but I knew after the first
knockdown that I was going to end it early. I had a bunch of friends and family in attendance. I’m
glad I gave them something to smile about.”

In his 2nd bout, which took place on September 23, 2016, Villa stopped Jose Mora in the 1st round.
Villa dropped Mora with a right hook and then stepped on the gas with a flurry of power punches
until the fight was stopped at 2:31. “Ruben has been very impressive in his first two outings,” stated Banner Promotions President Artie Pelullo after the fight. “We will have him back on November 4th on the undercard of our fight card in Corona, California.”

“The fight went as expected,” said Ken Thompson, President of Thompson Boxing Promotions. “Ruben was sensational in earning his second straight knockout win. It’s very early in his career, but
you can already tell how special he is.”  In his east coast debut, Ruben stopped Luis Diaz in the 6th round, in a bout thank place on April 14, 2017 at the MGM National Harbor in National Harbor, MD. The bout was featured on the undercard of a Showtime ShoBox event.
On July 1, 2017, Villa won a 4 round unanimous decision over veteran Jonathan Alcantara in Sacramento, California.

In his last bout, Ruben returned home to Salinas, CA and won an eight round unanimous decision over Marlon Olea on April 14, 2018 to win the WBO Youth Featherweight Title

Villa will continue to be active in the ring in 2018 and is expected to achieve world championship greatness in his professional boxing career.