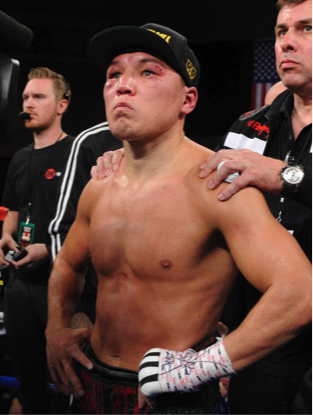 Ruslan Provodnikov (25-5, 18 KOs)–A Russian professional boxer in the Light Welterweight division and a former WBO Light Welterweight Champion. Ruslan is one of the most exciting fighters in the world today and consistently ranks as one of the top 3 highest rated fighters on television worldwide. Ruslan is known for his explosive punching power and sheer dominance inside the ring, rightfully earning himself the nickname “The Siberian Rocky.” Provodnikov was born on January 20, 1984

On April 15th, 2011, Ruslan scored an 8th-round TKO against Ivan Popoca, making ESPN’s Sports Center “Top Ten Plays of the Day” highlights. In 2012, he scored two major victories with a 6th round KO of David Torres on January 27th and a 2nd round KO of Jose Reynoso on June 29th.

In 2013, Ruslan exploded in to the foreground, first engaging in a March 16th battle against Timothy Bradley for the WBO World Welterweight championship. Though it ended in a close and controversial loss for Ruslan, the fight went down in history and was deemed the 2013 Boxing Writers Association of America (BWAA) “Fight of the Year.” Seven months later, Provodnikov went on to challenge Mike Alvarado for his WBO Jr. Welterweight championship title in Alvarado’s hometown of Denver, CO. Provodnikov fought valiantly and won the bout by a technical knockout in round 10 of 12 when Alvarado did not get off the stool.

On June 14, 2014, Provodnikov lost a controversial split decision to Chris Algieri in a bout where Provodnikov dropped Algieri twice in round 1 and grotesquley disfigured his right eye throughout the fight. After the bout, ESPN.com reporter Dan Rafael wrote, “It was so obvious that Algieri’s shots had almost nothing on them while the shots that Provodnikov landed were thudding, hard blows.”

Closing out 2014, Ruslan Provodnikov fought in a huge homecoming fight on November 28th in Moscow, Russia, winning a 5th round stoppage over former world champion Jose Luis Castillo. The fight marked the first time Ruslan had fought in his home country in over 7 years, and it garnered a sold out crowd of local fans.

On April 18, 2015, Ruslan engaged in a 12-round war with Lucas Matthysse in a battle of former world champions. The bout took place on April 18, 2015 at the Turning Stone Resort and Casino in Verona, New York and headlined an HBO Boxing After Dark broadcast. The fight more than lived up to it’s advance billing of being a “Sure-Fire Fight of the Year Candidate.”

Ruslan was cut early from an accidental headbutt and fell behind on the scorecards. In true “Siberian Rocky” form, Provodnikov stormed back in the 2nd half of the of the fight. He hurt Matthysse badly in round 10 and almost knocked the Argentine slugger out. Unfortunately, Ruslan came up on the short end by a majority decision score of 115-113, 115-113, and 114-114.

For his 4th consecutive fight on HBO, “The Siberian Rocky” Ruslan Provodnikov garnered over 1 million viewer—averaging 1.243 million viewers and peaking at an outstanding 1.380 million viewers for the bout, which is now the leading candidate for 2015 BWAA Fight of the Year.
Dan Rafael reporter from ESPN.com wrote after the bout, “In the end, they delivered everything that was expected of them in a hellacious, bloody battle that Matthysse won by the tightest of majority decisions Saturday night at the Turning Stone Resort Casino in what is, so far, the leading candidate for fight of the year.The sheer violence was on display from the outset as they took turns rocking each other.”

“As the 12th round began, the crowd was on its feet and going wild. And the warriors, rather than tap gloves, embraced and then began to hammer each other for one more round. They knew what they had put each other through. Blood was streaming down Provodnikov’s face from the cut eye and Matthysse was looking worn out, but they closed with a flourish in a fight that lived up to its very high expectations.”

Ruslan fought against undefeated Jesus Alvarez Rodriguez in a fight that took place on November 7, 2015 in Monte Carlo, Monaco. Provodnikov dominated the fight for 3 rounds and knocked Rodriguez out in the 4th. “The Siberian Rocky” fought under the guidance of his new trainer Joel Diaz, who has provided a fresh start for Ruslan.