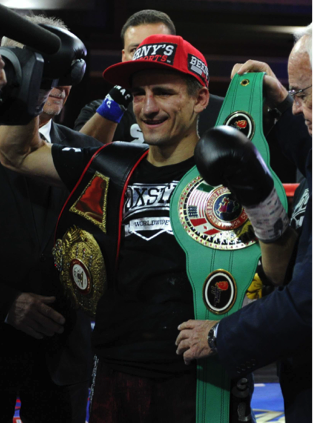 Petr Petrov (38-6-2, 19 KOs)–Petrov started boxing at the age of 11 years old and compiled an impressive record of 60-10 as an amatuer. He became interested in boxing by watching the sport on television as a child. Both Petr’s brother and sister also competed in the sport as amateurs. Petr is married and has no children.

In 2014, Petrov entered the prestigious Boxcino Lightweight Tournament promoted by Banner Promotions and broadcast on ESPN’s Friday Night Fights. After winning the quarterfinal and semifinal rounds with ease, Petrov met Fernando Carcamo in the Boxcino finals where, proving consistent, he dominated the fight to an 8th round knockout win. Petrov won the 2014 Boxcino Lightweight title that night, in addition to the NABA and NABO Lightweight titles. Since the tournament, Petrov met Gamaliel Diaz in the main event on ESPN’s Friday Night Fights where he won a 10 round unanimous decision. Petrov is a star on the rise and is in line to challenge for a world title in 2016.

On May 6, 2016, in Las Vegas, Petrov stopped Marvin Quintero in 6 rounds to retain his NABA title and capture the NABF title. The fight was a back and forth war, with both fighters landing heavy shots. Petrov’s punches were more effective as he closed the right eye of Quintero, and the fight had was stopped following round six.

On September 30, 2016, Petr stopped Michael Perez in six-rounds in a WBA title elimination bout. Petr put on a terrific performance from the start as he dropped Perez in the 2nd round and did not let up. Perez was cut over the right eye in the 2nd round, on his scalp in the 4th round. The pressure and the cuts finally got to Perez and he did not come out for round 7.

That win set up an opportunity to face undefeated WBO Lightweight world champion Terry Flanagan on April 8, 2017 in Manchester, England. In that bout, Petrov had some good moments, but came up short as he dropped a unanimous decision by scores of 120-108, 118-110 and 116-112.