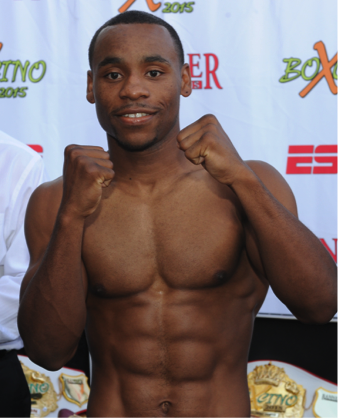 Brandon Adams (17-2, 12 KOs)–The first time trainer Dub Huntley held pads for Brandon Adams at the Maywood Boxing Club, he knew he had something. “He hit hard,” remembered Huntley. “Like a heavyweight. I made him go put on bigger gloves.”

Adams was just 19 years old at the time, a bit chubby at 170 pounds and had never had an amateur fight. Huntley, a trainer for 57 years, normally doesn’t work with amateurs, but trained Adams as a favor to a mutual friend. After just eight amateur fights, Adams turned pro.

Adams grew up wanting to be a boxer. He watched Mike Tyson fights and goaded friends into backyard bouts with a used set of boxing gloves. He also wanted to play football, but at just 5-foot-3 and a plump 207 pounds when entering high school, the school coaches never gave him a thought. “What I like about boxing is that it’s up to me about competing,” Adams said, remembering his rejection by football coaches. “It’s how hard I work and push myself which determines how far I get.”

When Adams graduated from high school, he saved some money and bought his own boxing equipment and joined the Maywood club. He had his first amateur fight just before his 20th birthday and won six of eight matches over two years. There were just as many matches scheduled that fell through. The former fat kid was now 5-foot-8 and a sculpted 165 pounds. Some guys took a peek at Adams at the weigh-in and suddenly remembered they were too ill to fight.

Adams turned pro in 2011 and fought primarily in San Diego for local promoter Bobby DePhilippis. While his opposition was ordinary, Adams’s hand speed and obvious power gained him a reputation as a man to avoid. Adams and Huntley knew they had to make a move, doing so in 2014 when entering the middleweight Boxcino tournament.

Adams announced himself by stopping veteran Daniel Edouard and beating tough Texan Ray Gatica in the semifinals. Willie Monroe beat Adams over 10 rounds in the finals, a result Adams does not dispute.

Adams did admit to being distracted before the Monroe bout. His wife was due to give birth to their first child, a son, that week. It also was Adams’s first main event on national television. Adams candidly said he is still getting used to the nerves that come with fighting on TV, although he looked very calm in his last ESPN outing, a second-round blowout over the normally durable Lekan Byfield.

Adams dropped to light-middleweight to enter the second Boxcino tournament, a move he said does not hurt his body. “As long as I have a couple of weeks, I can make 154 pounds with no problem,” said Adams. When I fought at middleweight, I used to just eat and not worry about my weight.”

“If he keeps his mind right, he can be a champion,” said Huntley. He’s strong, unusually strong, and he hits like a heavyweight. He’s got a really good chance to make it.”

Brandon scored a 5th round stoppage over Alex Perez on February 13 in Uncasville, Connecticut. Brandon stopped former sparring partner Vito Gasparyan at 35 seconds of round seven in the semifinals of the Boxcino jr. middleweight semifinals at the Sands Casino Resort Bethlehem on April 10. Adams broke Gasparyan down and damaged the right ear of Gasparyan until the fight was stopped.