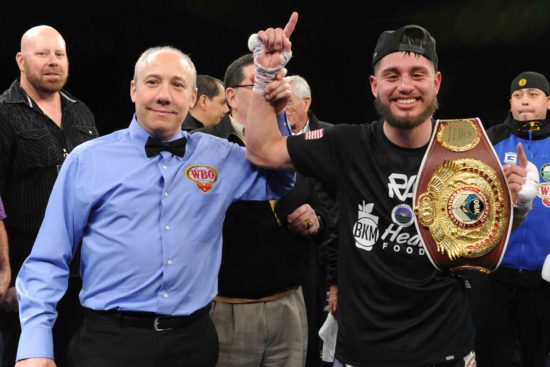 Villa (18-0, 5 KOs) of Salinas, California is just three weeks removed from an impressive 10-round unanimous decision over Alexei Collado in a bout that headlined a ShoBox: The New Generation card in Shreveport, Louisiana. With the win, Villa successfully defended his WBO International title.

In that bout, Villa was dominant throughout and displayed a diverse arsenal of punches that were very effective in decisively out-punching the offensive-minded Collado.
The ranking from the heralded magazine adds to his world rankings of #5 by the WBO and #13 by the WBC.

“I was just surprised to get the recognition that I deserve. It’s been tough, but its finally starting to payoff. I am trying to get better with each fight, and the people were happy. That the last fight against Collado meant a lot and opened up many doors,” said Villa.

“Being recognized in the top 10 by Ring Magazine solidifies and validates Ruben of graduating from top-prospect to bona fide contender. In his next bout, we are looking for Ruben to really make a statement and face another world-ranked opponent, in order to put him in position to fight for a world title,” said Banner Promotions President, Artie Pelullo.

“The rise of Ruben Villa has been gaining momentum since the world got to see him on Showtime last year. A world title bout is in his immediate future, and it’s great to see the media, like Ring Magazine, recognizing his accomplishments.” stated Ken Thompson, CEO of Thompson Boxing Promotions.
For regular updates on our fighters, events, and promotions, please like the Banner Promotions Facebook Page, and follow us on Instagram and Twitter @BannerBoxing.